Head Super Shapes include four popular skis you have probably seen: i.Speed, i.Magnum, i.Rally and i.Titan. For 2021, the i... becomes an e. for e.Magnum, e.Rally... I would bet this line of skis is among the most popular skis around the world and certainly some of Head's best sellers.

In this article, I'll compare those four skis among each other, explain what to expect and what differs. Should you want to compare the average stiffness (bending and torsional) to other brands such as Rossignol, Volkl and Atomic, you can use our online comparator for free in the members area.

It's often hard to make the right choice of skis to purchase, so Sooth is dedicated to give you True Product Data so you can truly compare! These four skis have distinct feelings, this article explains what to expect. 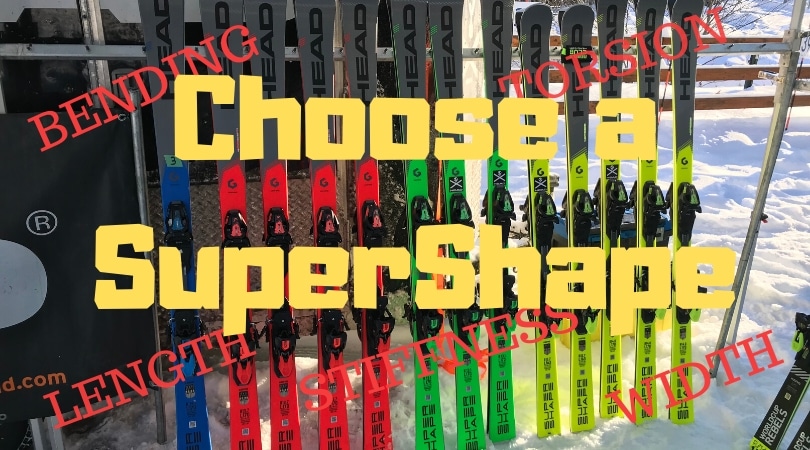 Head has made those fairly simple to sort out. Check the table bellow and you'll notice a few obvious facts:

The i.Speed is meant to be a ski that feels a little more like a GS, with the narrow waist, longer length and very slightly wider radius. One thing to mention is that when we compare skis, we usually try to use the same length. But there's a warning that comes with doing this. As the i.Speed is meant to feel like a GS and as you can notice, it's the only of the four skis that has a longer size, we should actually compare a size longer to the three others, if we wanted to be more accurate. But for this comparison, all charts present the Super Shapes in 170 cm length.

What really matters to me is which one is stiffer/softer, in bending/torsion and in which part of the ski. Ultimately, to what other skis can those be compared? Are they as powerful as a slalom ski? What can we expect in terms of edge grip? Those answers are hard to find from virtually any ski manufacturer out there. Let's have a look at what truly matters to make a good choice.

Bending stiffness is an important factor to compare. This is what makes a ski snappy, or responsible for the "pop" that delivers energy from one turn to another. The stiffer a ski is in bending, the more you will feel that "pop". Of course, this also depends on the amount of force you will apply to a ski, which comes from essentially tow things: your weigh and your technique. You can't get any pop if you don't bend that ski!

Bending stiffness is also what makes a ski easier or hard to deal with in variable terrain, such as choppy snow, moguls, corn snow. The softer in bending, the more it will feel forgiving at lower speed. At higher speed, it will feel less in control, so your cruising speed is an important factor.

Is there any obvious difference in the stiffness of the shovel of those skis? Barely noticeable. We could mention that the i.Magnum has a slightly stiffer shovel and the other are the same, I seriously doubt even a ski designer would notice a difference.

When it comes to torsional stiffness, this is where we get the most variations! Also, from our experience as ski data experts, we know that variations in torsion is what a skier feels the most! Torsional stiffness is mainly responsible for edge grip. At one end, a stiffer ski will feel like it grips a lot, sometimes even too much, as if the skis were "over-tuned". It requires a skier to be precise, or he will feel the skis determine the way.  At the other end, a torsionally soft ski will feel more playful, easier to adapt to any situation, very foregiving.

The first element that strikes us when looking at torsional stiffness data is the overall distribution that is not typical. We usually see bell shapes, but Head has a very distinct look which I tend to refer to a their identity. They are built in a way that they increase the level of torsional stiffness where it matters the most: at the tip and tail. This local variation in stiffness is smart, as it does not increase the bending stiffness too much (depending on fiber orientation, bending and torsional are often related). Doing so maintains a versatile or playful ski, somewhat soft in bending, while providing a very high level of edge grip.

Individually for each model, we still have the i.Magnum as the stiffest torsionally in general, but the i.Titan is very close. At the other end, the i.Speed and the i.Rally are softer torsionally. An interesting fact is that they all have different levels of torsional stiffness at the shovel, but at the tail, the i.Speed and the i.Rally are identical, while the i.Magnum and the i.Titan are also identical. So the feeling of turn initiation will be slightly different for each ski, but the end of turn will feel the same in the mentioned equivalents.

Comparison to other brands

So let's imagine we want to compare to other brands... Say we look at Rossignol Hero Elite Plus Ti. This is one of the most popular skis in the world. While it's reputation is to be stiff, yet versatile, looking at the bending and torsional stiffness distribution, we can observe obvious differences:

Nothing is better than trying skis before buying them, but trying every option in any given snow condition is quite difficult to achieve. So we provide extra information so you can clearly compare. We hope this information is useful to your ski selection. We offer personalized ski recommendations to help people enjoy their equipment. You can contact us in the member area to obtain a personalized recommendation.