We have identified 10 all-mountain skis ideal for eastern North America. They are popular and skiers like them because they are versatile and fun in a wide range of conditions. Several of these skis have very similar geometries and can only be distinguished by their flexural and torsional stiffnesses. As it will be demonstrated, it is important to consider these properties in order to select the right model for you. So here is our comparison of 10 all-mountain skis good for most of eastern North America.

On our site, it is possible to filter among hundreds of options and identify a few interesting skis according to specific criteria. We can use this database to target popular model with a waist width of 80 to 90 mm. We also chose to focus on a length between 170 and 180 cm for easier comparison, because the properties of skis vary according to its length. However, this choice can be personalized depending on the user. https://soothski.com/welcome-ski-finder-and-comparator-premium/finder-comparator-premium/

Despite these refinements, there are still too many options. We therefore carried out a finer search for versatile all-mountain type skis, between 84-90mm (measured) at the waist, between 172 and 180 cm long and having a radius of 16 to 20m (calculated from our independent measurements). This allows us to obtain 10 models from 10 different companies, all having roughly the same geometry (size, radius, camber ...). Visually, these skis all look very similar. It would be difficult to tell them apart in the store.

The weight of these skis varies between 1.7kg and 2.2kg, which makes them oriented more towards slackcountry and piste skiing. Despite these similarities, these skis are very different from each other and the only way to notice this, without testing them on snow, is to compare their bending and torsional stiffnesses.

Interpretation of the stiffness graph

The more rigid the ski is in average bending (to the right), the more energy it requires to flex and the higher its speed limit will be. So you either have to be heavier to enjoy it, ski faster and/or generate a lot of lateral energy during your turns. Of course, the more you like turn-to-turn energy (pop), the more you look at the options on the right. On the other hand, the further to the right, the less forgiving the ski will be in bumps and in soft snow, and the less lively the ski will be at low speed. The more rigid the ski is its average torsion (upwards), the more the ski will grip (edge hold). This is an advantage on firm conditions because it "bites". However, it is less forgiving, requires a lot of precision from the skier and is less “playful”. 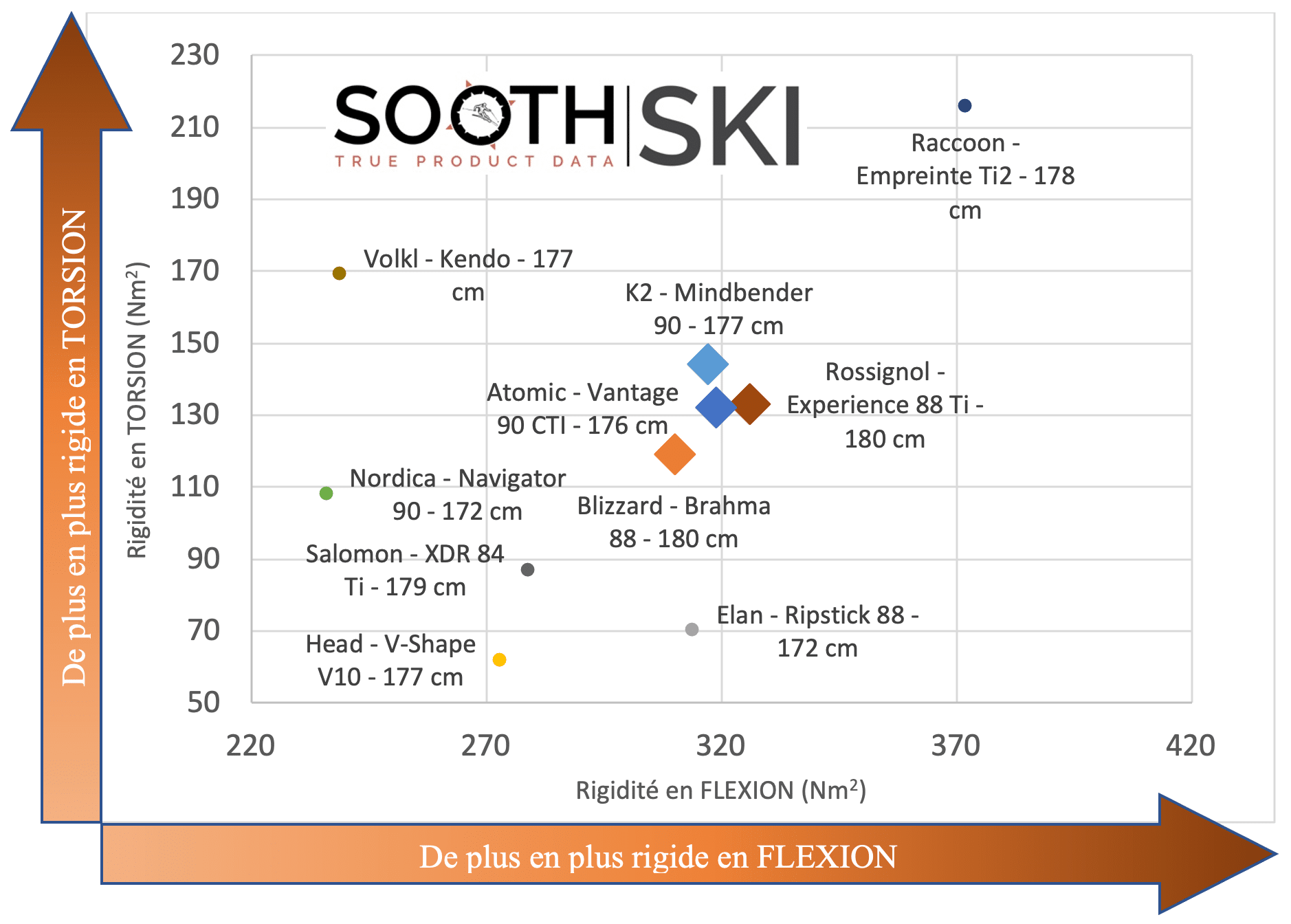 It is obvious that the 10 skis identified are different when comparing their average bending and torsional stiffnesses. Some skis stand out:

Note that all these comparisons of ski feels are relative. Depending on your weight and style, your on-snow feelings will vary. A ski that is unpleasant for one skier may be ideal for another skier, even if both skiers are looking for the same type of on-snow feels.

Out of the 10 options presented, it is clear that the skis in this category are heterogeneous. Indeed, the flexural rigidity of these geometrically similar skis varies by more than 60% while the torsional rigidity varies by more than 400% !! There are skis to suit all tastes in this selection. Even the skis that have roughly the same average level of bending and torsional stiffnesses have important differences when we look at the stiffness distributions. Indeed, the Blizzard Brahma, Atomic Vantage 90 CTi, Rossignol Experience 88 Ti and K2 Mindbender 90 all have similar average stiffnesses. However, important differences exist between these skis on snow, and we have to look at the distribution of bending and torsional stiffnesses to explain that.

The following graphs are broken down into four sections. In all cases, the heel of the ski is on the left and the tip is on the right. The horizontal axis is in meters and the "0" corresponds to the "mounting point" as recommended by the manufacturer. 1) The first graph shows a side view of the ski. You can easily compare the camber, rocker and tip shape of all these skis. 2) The second graph shows a top view of the ski where you can distinguish the sidecut, tip taper, etc. The lines in the center of this graph also show the "effective edge" (solid line) and the distance between the widest point of the ski (dotted line). 3) The third graph shows the bending stiffness distribution. The higher the curve at a given location, the more rigid the ski is in flexion at that location. Note that this is not a displacement curve under a given load, but rather the local stiffness (like a spring that is more or less difficult to stretch). 4) The fourth graph shows the torsional stiffness distribution. As for the bending stiffness, the higher the curve, the more rigid the ski is at this point in torsion. Torsional stiffness is the ratio of torque required to "twist" that part of the ski through a certain angle. On piste, skis deform in flexion and torsion. The higher the stiffnesses, the greater the force / torque must be to create this deformation.

Although the 2020 Atomic Vantage 90 CTi and the 2020 Rossignol Experience 88 Ti have practically the same average stiffness values, it is evident with the distribution of flex and torsion at the rear part of these skis is quite different, being almost twice as stiff at the end of the tail (see the "1" on the graph above)! The 2020 Rossignol Experience 88 Ti will offer more support in the rear of the ski, resulting in a more aggressive (less forgiving) handling effect when exiting a turn. Since the Atomic Vantage 90 CTi 2020 is softer, its exit from the turn will be smoother and easier to execute, while being overall more forgiving. However, it will also have a little less edge grip.

Now for the Blizzard Brahma 88 and the K2 Mindbender 90. Again, while their average stiffnesses are quite similar, the devil is in the details. The Blizzard Brahma 88 features a stiffer frontend compared to the Mindbender (see near "2" on the curves). This difference may seem subtle, but it will be felt at the start of the turn as the stiffer ski will grip  earlier. The front of the ski is also a key element in front-to-back balance while skiing. A softer frontend will be more forgiving while a stiffer frontend will require more precision from the skier, especially in varied terrain. It is also easy to observe on this graph that the tail of the Mindbender is more pronounced than for the Brahma and starts earlier, which results in a shorter effective length.

Selection of 8 all-mountain skis for women?