Does metal really matter in skis?

When skis contain metal laminates (Ti), do you expect them to be stiffer? Many companies have a model that contains metal and a counterpart that doesn't. What's the difference? The metal commonly used is NOT titanium, as most people think. It's Titanal, and it's aluminum based. As a general statement, manufacturers used it in expert skis to make them "powerful" or stiffer (see Unofficial networks' post about it). However, our measurements show that not all skis containing Ti are actually different, and we also found out that some skis without Ti can actually be stiffer! So don't let the construction or the marketing mislead you in your purchase; trust the measurements! 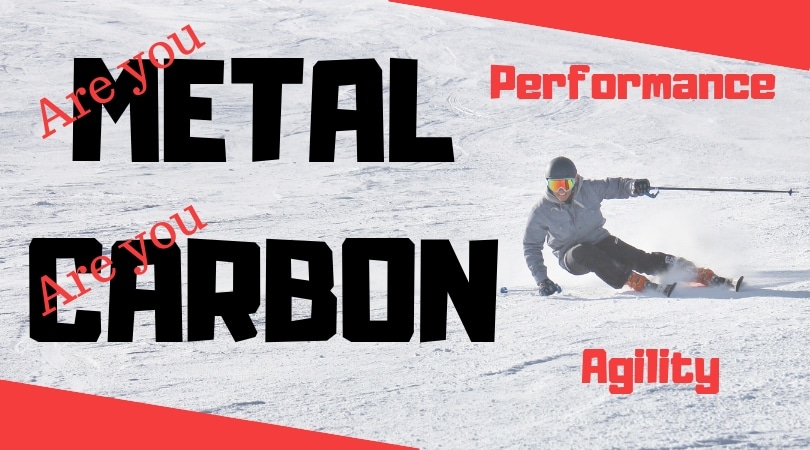 In the 1960s, metal was laminated onto wood skis by Howard Head, who was trying to build lighter skis because it was believed that a light ski would be easier to turn. The result was unexpected. The new ski construction was certainly easier to turn, but this was due to increased torsional stiffness!

On the slopes, skiers found they could turn the ski far more easily than wooden designs. Head later noted that "...lightness is not what makes a ski better. In trying to build a lighter ski, I accidentally created a ski that was stiffer in torsion, one that would turn and track more easily. That was the magic difference." The Standard was three times as stiff torsionally as wooden skis, which allowed the edge to be driven into the snow much more strongly. The effect was so pronounced that the ski  became known as "The Cheater" because it made beginners look like pros.”

Nowadays, metal laminates in skis are common practice for all ski manufacturers. Virtually every ski company builds some models that include Titanal. In a lot of cases, manufacturers offer a given model in a carbon version (C or Ca) for intermediate skiers and in a Titanal version (Ti) for expert skiers. Besides the material used, the difference between the Ca and Ti versions often lies in their torsional stiffness (e.g., Rossignol Hero and K2 Ikonic series). From a branding point of view, it can make sense to link the materials used to the torsional stiffness levels. However, not everyone follows this rule. Skis that include Titanal are not necessarily stiffer in torsion (or bending) than their carbon version (e.g., Blizzard Quattro and Alight), and nothing prevents a designer from making a stiff ski from only fiberglass or carbon fiber (e.g., DPS Pure constructions and Blizzard ZeroG). It all depends on how the fibers and metal layers are used in a ski. Besides the stiffness, other factors are also important like the mass of the ski, its damping characteristics, production cost, etc.

There are skis out there that have almost identical stiffness (and also many other characteristics) but a different price point. So be careful when shopping : 1) not all Ti versions are actually stiffer than their counterpart Ca version, and 2) it's not because a ski has Ti that it is super stiff! Let's have a look at a few comparisons from our exclusive measurements.

The Redster S7 does not contain Titanal, while the S9 does. The skis clearly have a difference in torsional stiffness. As we always try to avoid referencing to the skier's level, let's just say the S7 will be more playful, while the S9 will feel more powerful. 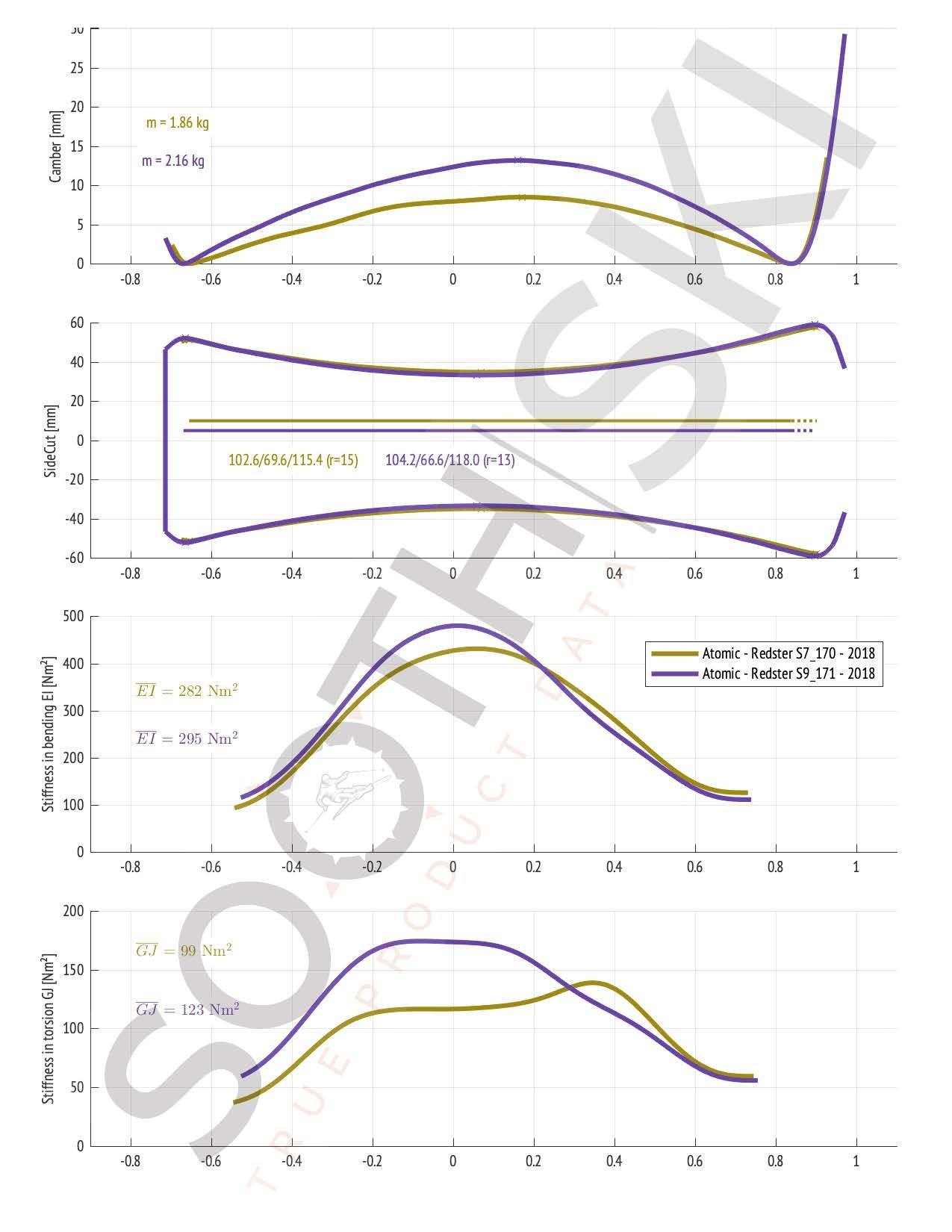 K2 Ikonic 84 has a version with Titanal and a version without. Look at the torsional stiffness on the last graph.  The difference is staggering. It's a question of taste, and that's hard to discuss. But let's say the Ti version in this case will really feel more powerful compared to the carbon version. Interestingly, you would not be able to feel any difference between these skis by hand flexing them. Their bending stiffness profiles are practically the same. 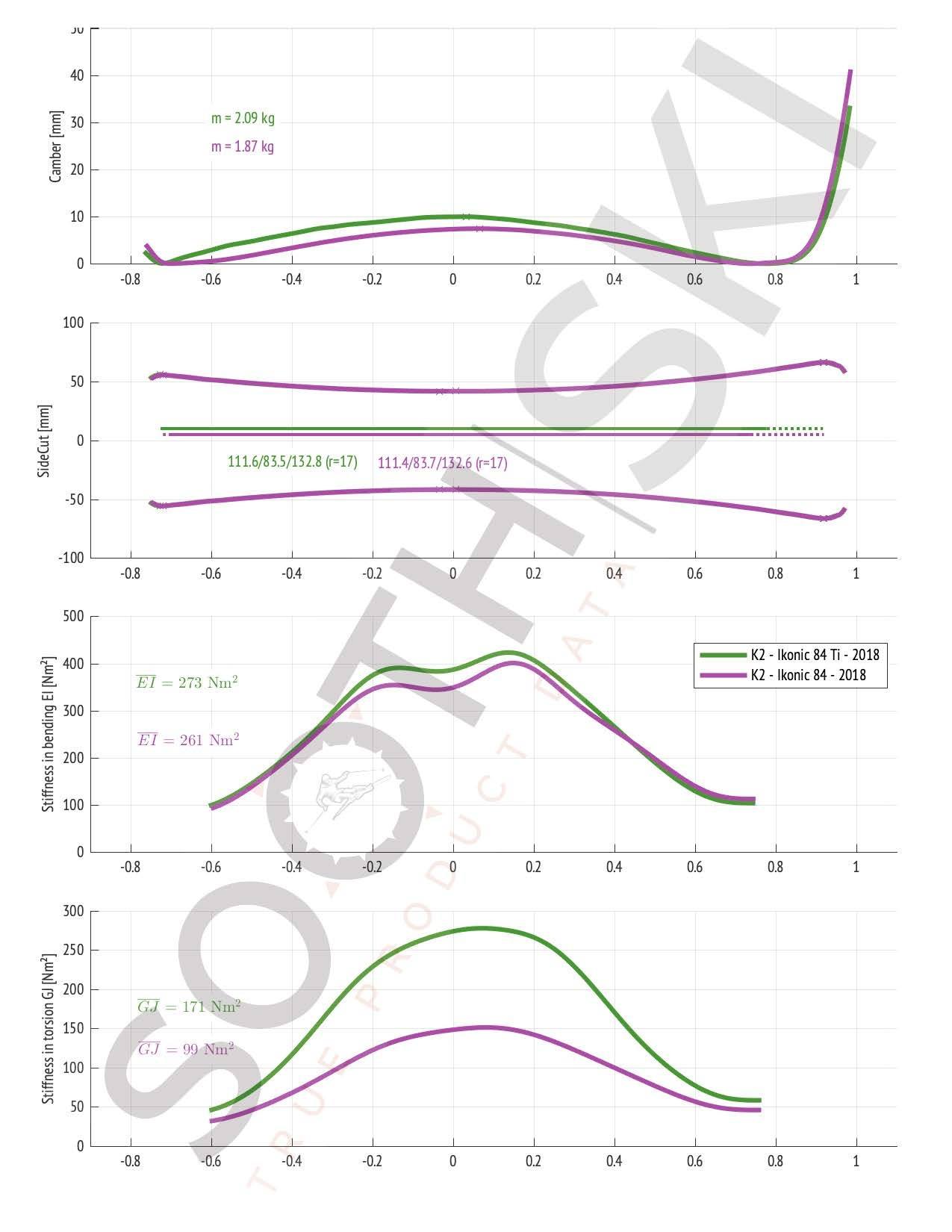 Connect with us to keep up with our development

Rossignol Hero slalom skis come in an HP (previously Ca) and Ti version. As with the K2 Ikonics, the main difference between these models is in their level of torsional stiffness. Rossignol describes the HP ski as suited for advanced skiers (or "recreational race ski") and the Ti as a ski for expert racers. You would likely notice significant differences between these two skis. 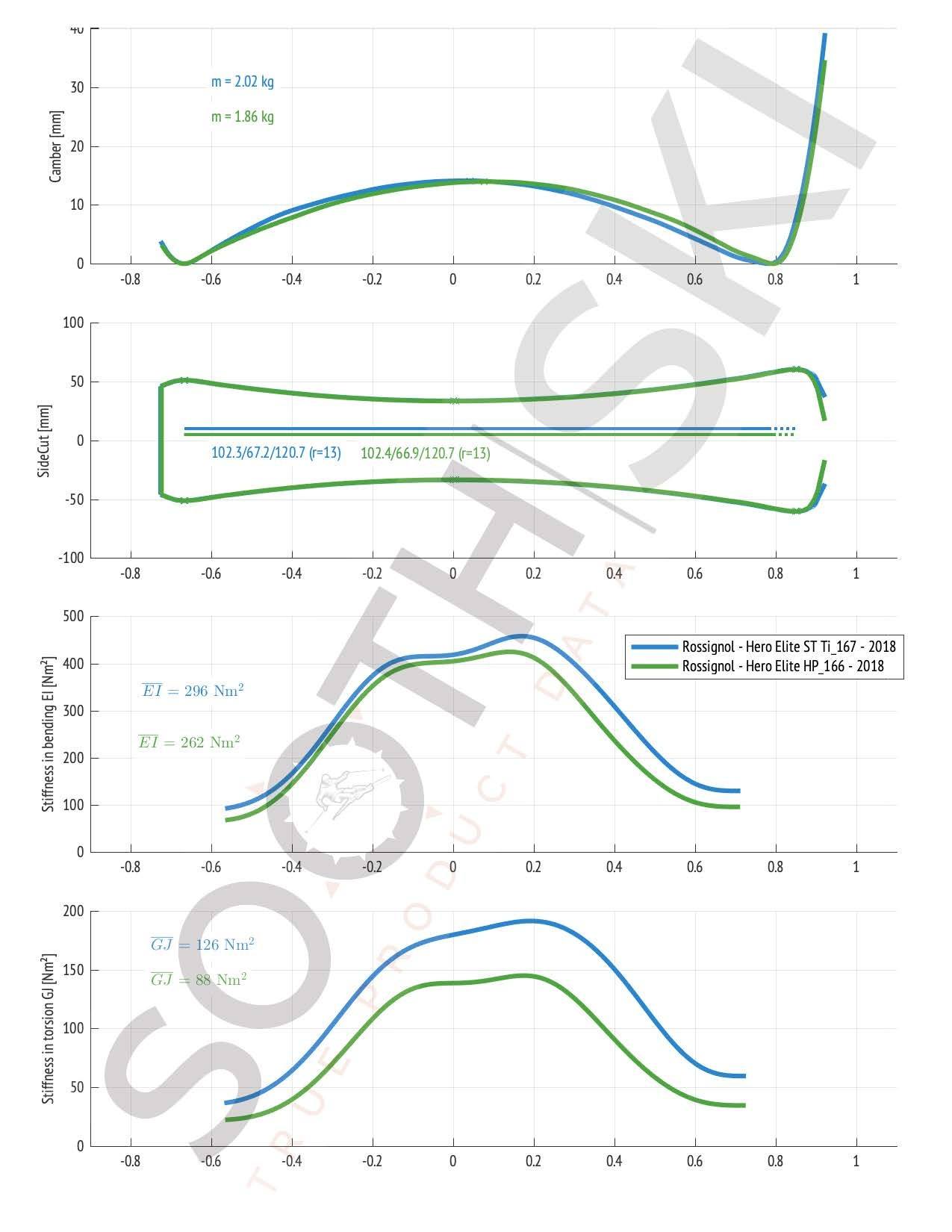 Blizzard confuses me. The difference between these models is so small, even in their mass, that I'm convinced it's nearly impossible to feel it on the snow. At first, I thought we had made a mistake in our measurements! But looking at the following examples, the same scenario is repeated with the Alight in any given length. Don't expect a lot of difference between these skis besides their price point ... 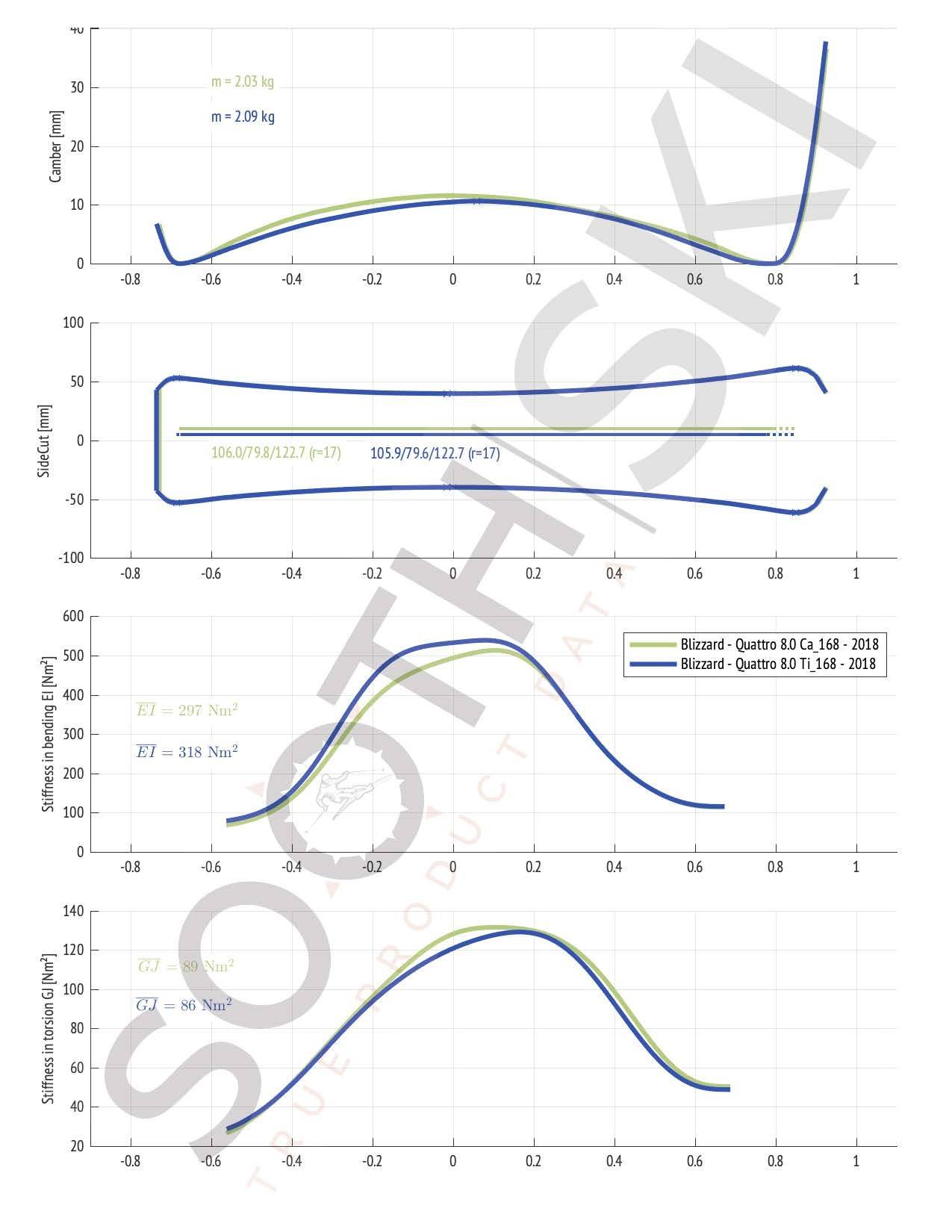 Same as the Blizzard Quattro 8.0, I'm not sure why  a Ca AND a Ti version were made. The stiffness, geometry and mass variations are barely noticeable. 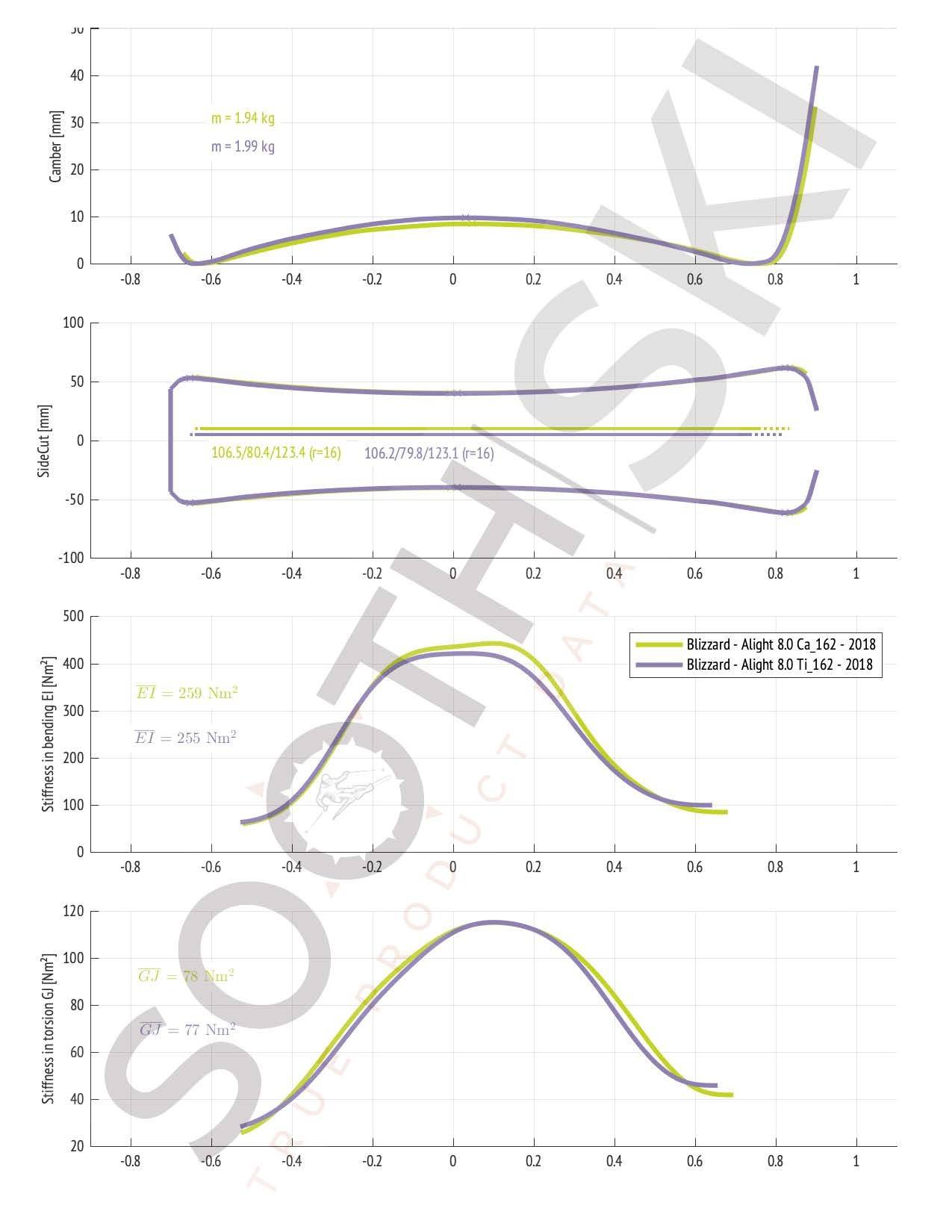 So, is it required to add Titanal laminates to build a stiff and powerful ski? Absolutely not. It all depends on how you use the materials. Are there any skis without Titanal that are actually stiff and powerful? Yes. Let's look at some examples.

Guess which one of these skis has Titanal 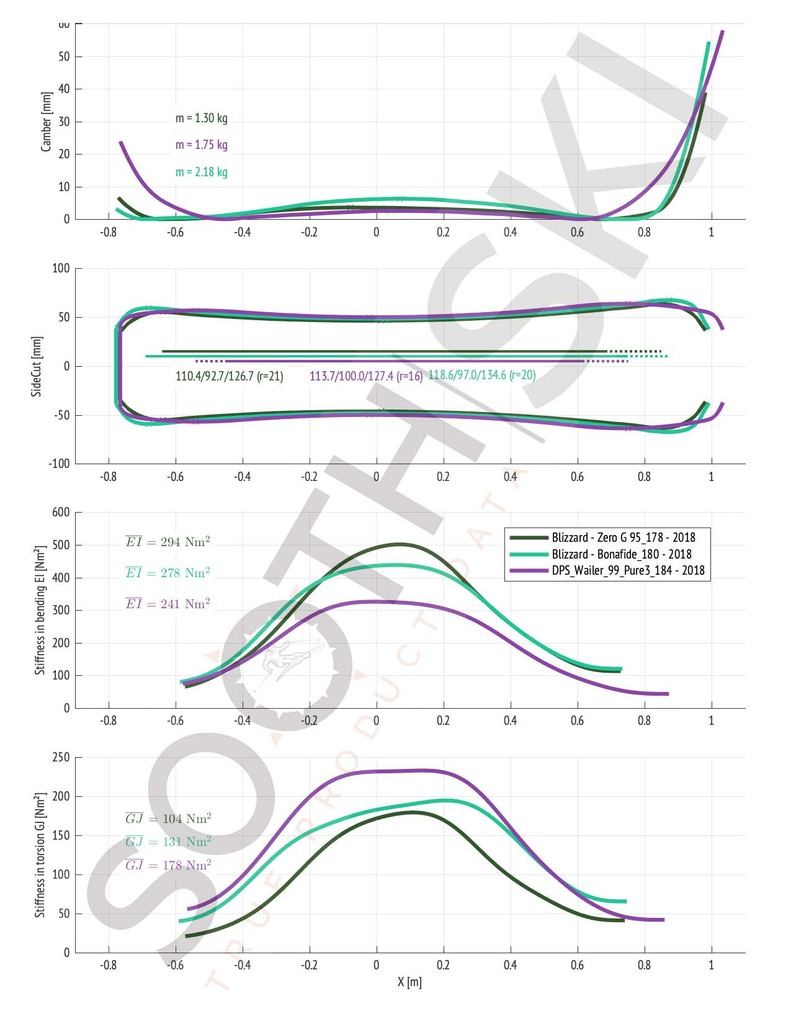 So here you have three skis with similar dimensions. Only one of them is built with Titanal (according to the manufacturer). Can you guess which one? Look at the weight.  It's your best guide. Although Titanal is mostly aluminum, which is a lightweight metal, it's still heavier (per unit of weight) than carbon or even fibreglass (specific stiffness). Among the three presented skis above, only the Bonafide has Titanal (2 layers), and it is the heaviest. Despite the absence of Titanal, you can also see that the Zero G is slightly stiffer in bending and that the DPS Wailer Pure 3 has a higher level of torsional stiffness.  Hopefully, you're now convinced that Titanal in your skis does not necessarily mean stiffer and powerful!

Beware of what you are told: not all skis with metal are stiffer! You should not buy a ski only based on what you are told with regards to its construction. While metal (Titanal) constructions are often associated with expert skis, it's not always the case. True product data, data that is measured, can help you compare products and select a ski that suits you. At the end, what really matters is what you feel while skiing. Different combinations of bending stiffness and torsional stiffness produce a wide variety of different feelings on snow. The key is to identify the proper combination that you enjoy the most.